The tea of many names

Fireweed – what’s behind the name?

Many of us have wondered about the reason behind the name of a particular tea, but very few of us have ever discovered the answer.

Fireweed is not the only name this herb is known by. The scientific name for fireweed tea or Ivan Chai is rosebay willowherb, but Russians usually go by Ivan Chai or Koporsky tea.

Today, we will try to shed some light on the most common theories behind the name, so let’s start from the beginning. 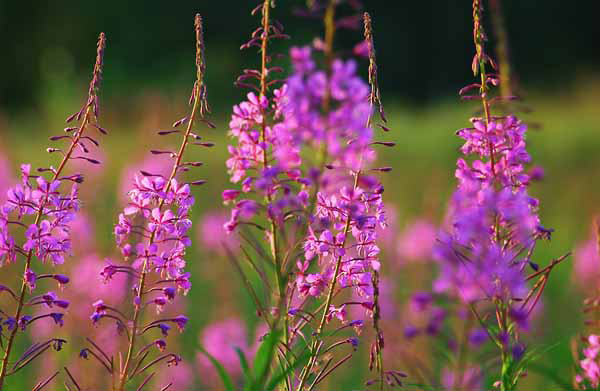 Fireweed is a narrow alternate leaf plant from the evening primrose family, epilobium angustifolium. It loves to grow in burnt or logged areas in slightly acidic soil and in full sun.

This plant got its name because it “takes off like wildfire” on lands that have been scorched by fire. In fact, it is one of the first plants to grow in an area of devastation, bringing healing and renewal to the earth.

Fireweed is also known as willowherb or rosebay willowherb, probably due to the fact that the leaves resemble a willow plant, but actually it is a herb and unlike the willow it is not a shrub or a woody plant. 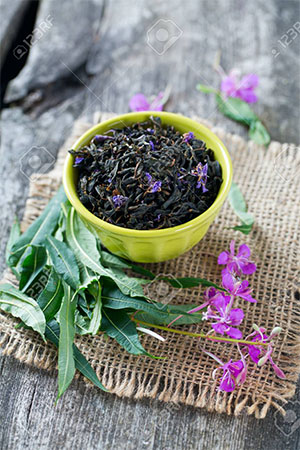 The popularity of fireweed tea perhaps stems from the similarity of its production to that of ‘regular’ Chinese tea. It too can be ‘fermented’ in the same manner as the leaves of camellia sinensis, leading to a richly flavoured and deeply coloured brew that moves beyond the disappointing blandness of some herbal teas.

Unlike every other herbal tea, fireweed tea does not just consist of dried leaves in hot water; the leaves are fermented, just like those in black tea. The result is a tea that tastes very much like black tea, only with no caffeine.

Fireweed tea is high in iron, copper, potassium and calcium. It helps boost the immune system, lowers blood pressure and relieves the symptoms of fever. As it contains a high level of antioxidants, it also helps to burn fat, restores the metabolism, and cleans out toxins and heavy metals. Ivan Chai can also help people quit smoking and can be used in the treatment of alcohol addiction. 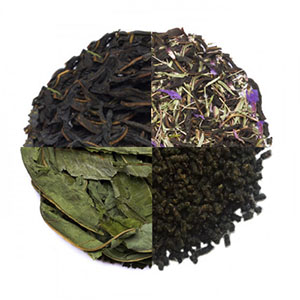 Fireweed – what’s behind the name?

Koporsky tea is another name for fireweed tea. It began its story in the small town of Koporye, where it has been produced since the 13th century. Once exported abroad, Europeans quickly became aware of this new Russian tea. Indeed, many preferred it due to its beneficial properties. There is also an assumption that the tea got its name precisely because it was Russian; as all Russians used to be called Ivan when they were abroad, so Ivan Chai is another way of saying that the tea originates from Russia.

According to one legend, there was once a young boy called Ivan who lived in a village near St. Petersburg. He used to wear a bright red shirt and was known to be a dedicated herbalist. For days on end he would spend his time on the forest edges, collecting berries, herbs, roots and flowers.

The locals knew about this young man and every time they saw a flickering red shirt moving through the trees, they would exclaim “Ivan chai brodit!” (here, there is a play on words as this phrase means “Ivan should be wandering about” – “chai” means “tea” in modern Russian, but it used to mean “should”). Then, all of a sudden, the boy disappeared. No one knew how or when this happened. But from that time on, scarlet flowers, that no one had ever seen before, began to grow on the edges of the forest near the village.

Every time people saw these flowers, they would liken them to Ivan’s scarlet shirt and would call out “Da eto chai Ivan!” (“Oh, it should be Ivan!”). Ever since then, this new plant with the bright flower heads has been known as Ivan Chai. The name caught on and became popular.

It was then discovered that once this plant was boiled, it would produce a very tasty and invigorating drink. As a result, fireweed began to be harvested and dried for future use as a popular tea.

The history of fireweed tea goes back to 12th-century Russia. People called it Russian tea and exported it to England, Denmark, Germany and France. At one point in time, rosebay willowherb was all the rage in Britain.

Years before Chinese tea arrived in Russia, rosebay willowherb had been used by locals to brew a hot beverage renowned for its health properties and generally wholesome effects. When Chinese tea began penetrating Russian markets in the 19th century, rosebay willowherb tea was championed as a local, low-cost substitute. The recipe for its preparation mimicked that of Chinese loose-leaf tea, and the resulting drink strongly resembled subtropical tea, even to the extent that it was sometimes fraudulently exported as ‘regular’ tea by unscrupulous merchants. 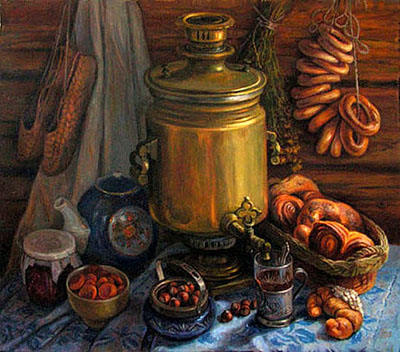 The young shoots of willowherb have long been collected by British, Native American and Russian peasants as a food, while the more mature stems were harvested for their pith – a rich source of vitamin C and provitamin A.

Russians ate the fresh young leaves in salads and they used the dried leaves as an ingredient of bread dough. Native Americans used fireweed in a similar way. In Alaska, people made fireweed jellies, syrups, candies and ice cream, along with fireweed honey. Fireweed shoots were boiled and eaten as ‘wild asparagus’.

It was the Russians who came up with the idea of fermenting the plant. The leaves were picked when the herb was at the beginning of its flowering season, throughout July and August. They were then spread out on a cloth where they would be left to wilt in the shade for around 24 hours. Peasants crushed the leaves until they juiced and they left them overnight to ferment. Then they would be quickly dried in the oven or in direct sunlight. The fermentation process helped to intensify all the biologically active ingredients.

It is said that fireweed tea used to be more valuable than gold or fur. Its taste is reported to have been more popular than the classic black tea of the late 19th century, but the reasons for it falling out of fashion are less clear.

Russian sources claim that the East India Company began a smear campaign against ‘Ivan’s tea’. The aim was to discredit the delicious Russian brew so as to remove it as a competitor from the British market. Others point to the collapse of commercial production in Russia in the wake of the Russian Revolution. Either way, in the 19th century, Koporye tea, or Ivan’s tea, remained something of a hidden treasure.

It is likely that fireweed tea gained a lot of recognition after World Wars I and II, as it grew rapidly all over heavily bombed areas, bringing renewal and restoration. In wartime Britain, the rosebay’s pink flowers were often seen among the rubble and ruins of buildings levelled during the Blitz.

Ivan Chai was reintroduced early in the 20th century, with tea leaves now no longer costing the fortune they once did. Fireweed tea is not drunk as a cheaper alternative to Chinese tea, the focus having shifted to its numerous health benefits.

Although Ivan’s tea will perhaps never regain its pre-19th-century popularity as an internationally renowned export, it is still commonly sold and consumed in many countries.

Being caffeine-free and mildly sedative, this tea is loved for its relaxing effects. It is also well known for its anti-inflammatory properties and as an aid to digestion. Rich in vitamins C and A, fireweed tea is drunk as a general tonic for the whole system, but particularly so at night and after meals. 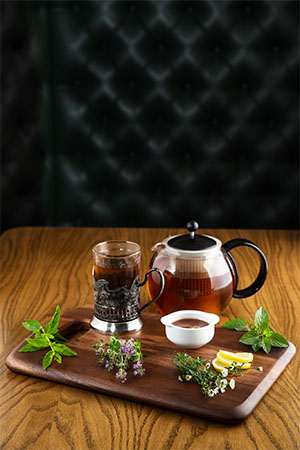 You can find fireweed tea in our menu. Enjoy the tea in our cosy rest area during your Banya session.