Aloe vera is widely known as a medicinal and healing plant. According to legend, the ancient Egyptians added its juice to the pharaohs’ drinks as they believed this would lead to immortality. Aloe vera also became popular during the Greco-Roman period as soldiers believed in its healing power and took the plant with them on every military campaign.

Aloe vera is rich in vitamins, enzymes and acids. Its leaves and stem contain allantoin, natural antioxidants, and a combination of vitamins B, C and E, as well as beta-carotene, which is converted into vitamin A.

ANTI-INFLAMMATORY AND ANTIBACTERIAL PROPERTIES
One of the most common uses of aloe vera is to heal small wounds, scratches, cuts and scars. The plant’s beneficial effect on the skin is due to its salicylic acid, glycoproteins and flavonoids, which help to relieve inflammation, and actively regenerate and restore the skin.

ANTIOXIDANT PROPERTIES
The biochemical structure of aloe vera contains many antioxidants, including vitamins C and E which are widely known to help protect the skin against pollution, sun exposure and other environmental influences, and to saturate it with oxygen. Aloe vera’s minerals – magnesium, zinc, calcium, potassium and chromium – have the similar effect of preventing cell damage.

ANTI-AGEING EFFECT
The biologically active components of aloe vera stimulate the production of fibroblast, elastin and collagen in the skin, which helps to restore its firmness and increase its elasticity.

MOISTURISING PROPERTIES
Aloe vera contains polycarbohydrates that attract moisture to cells and prevent its evaporation from every layer of the epidermis. In addition, lignin helps to deliver all the active substances to the deeper layers of the skin. Together with the softening effects of amino acid, aloe vera helps to produce moist and smooth skin. 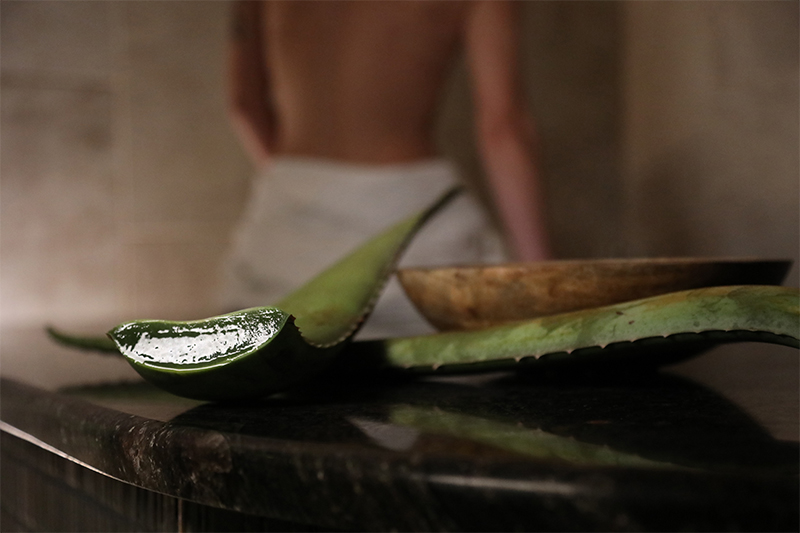 Having all these properties in mind, it is clear that aloe vera can be used for all skin types.
– dry skin: aloe vera “locks in” moisture and nourishes the deep layers of the epidermis.
– oily skin: aloe vera normalises the work of the sebaceous glands and prevents the appearance of acne.
– sensitive skin: aloe vera relieves inflammation, saturates the skin with vitamins and microelements, and promotes regeneration.
– ageing skin: aloe vera increases the elasticity and firmness of the skin.

Because of aloe vera’s healing properties, the plant also has a positive effect on hair:
– intensively nourishes and regenerates it.
– helps to soften broken hair and gives it elasticity.
– the allantoin helps to promote the growth of hair.
– aloe vera is widely used in the fight against hair loss due to its ability to activate dormant hair follicles.

If you would like to experience the incredible healing properties of aloe vera for yourself, please don’t hesitate to contact us so we can book your banya session and an aloe vera full body & hair mask treatment.