St John’s wort is a herbal remedy that was very familiar to our ancestors, both in Russia and in England. In fact, because it was believed to have magical powers, it was often used to treat a variety of health problems. St John’s wort was valued for its ability to heal wounds, ward off evil spirits and prevent disease.

In medieval England, the plant was hung above doorways and around windows to prevent the devil from entering. There are even records of it being used specifically by women who seemed to be “possessed by a devil”. In such cases, they would place St John’s wort on their breasts and scatter it throughout their home (Field Guide to the Wild Flowers of Britain, p. 68).

Our Russian ancestors made talismans and charms with St John’s wort as they believed that this would help keep them healthy and prevent any evil happening to them. Indeed, it was used so widely that it was known as “a herb for a hundred diseases”. And, of course, this plant has been a part of banya cleansing rituals for probably as long as the Russian Banya has existed.

In a bathhouse setting, the phytotherapeutic benefits of St John’s wort steam are mainly derived from the volatile oils and flavonoids which give the plant its characteristic fragrance. Both the oils and the flavonoids exert their therapeutic effects when in direct contact with hot water or hot moist air. They also contain some anxiolytic properties.

At Banya No.1, St John’s wort is one of the plants commonly used for herbal steams. Here, a well-strained liquid from a herbal infusion is poured onto hot stones.

Kurt Schnaubelt, an expert on aromatherapy, is quoted as having said this about the aroma of St John’s wort’s essential oil (a condensed essence of the volatile oils found in the plant): “The penetrating smell can be felt as a warm pleasant relaxed feeling, travelling from the nose to the brain.”

It is interesting to note that, just as birch contains hyperoside (a flavonoid with anti-inflammatory, antiviral and antioxidative properties), the volatile oils found in St John’s wort are also anti-inflammatory and antispasmodic.

Naphthodianthrones, which like tannins have phenolic rings in their structure, are poorly soluble in water but they may still generate some small benefits in herbal steam. Although not water-soluble, they are likely to form a film on the surface of a herbal infusion, which, when it hits a hot stone, releases its benefits into the steam.

As a result, a St John’s wort herbal steam produces a number of benefits:

In modern phytotherapy, St John’s wort is widely used to support women with PMS and those going through the menopause. It is also an important herb for women who feel exposed to feelings of nervousness. And, of course, it is used by both women and men to address low mood issues. When taken internally, St John’s wort is bitter so it will activate peristaltic activity, and support liver and gallbladder health. The fixed oil of St John’s wort is applied externally to relieve neuralgia and nerve pain, and to promote wound healing. 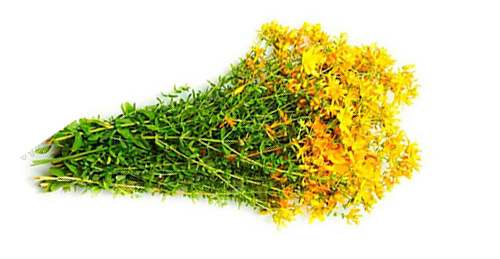 St John’s wort was used in Galenic medicine and it was also recommended by Paracelsus in the 16th century. It contains naphthodianthrones (hypericin and pseudohypericin), flavonoids (proanthocyanidin, hyperin, biflavone, amentoflavone and quercetin, isoquercetin, rutin, hyperoside and others), tannins, volatile oils, vitamins (C, PP, carotene, nicotinic acid) and many other compounds (Mills & Bone, 2003). Modern science attributes most of the medicinal properties of St John’s wort to the naphthodianthrones (antidepressive effects) and flavonoids found in the highest concentrations in the flowers of the plant. Meanwhile, the leaves of St John’s wort are rich in tannins. 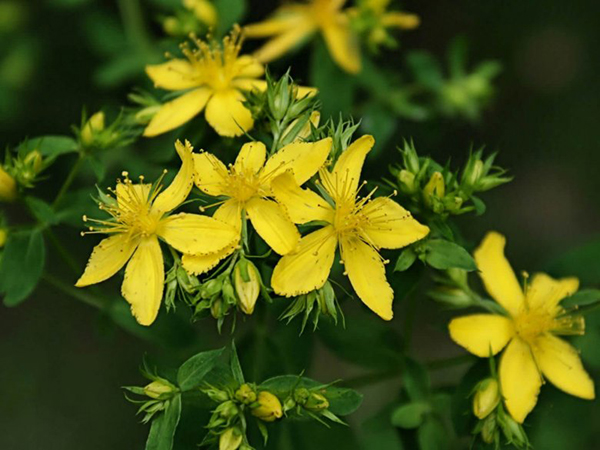 St John’s wort is a ubiquitous and undemanding plant that can be found on roadsides, along hedgerows, in meadows, woods and heaths, as well as in cities. It has a modest appearance with five small yellow-petalled flowers and the characteristic feature of perforated leaves – tiny white dots that are clearly visible when the leaf is held up against the sun (hence the Latin name Hypericum perforatum).