It’s rare to experience both excitement and fear before a spa day, but Banya No.1, London’s foremost – and indeed only – Russian Spa, is a bit of a special case. I was really looking forward to experiencing an authentic banya, but I was also afraid of being stripped naked, beaten senseless with birch logs and thrown into an ice cold underground lake.

I know, I know. I think I may have let my imagination run away with me a bit. It turns out that parenie, the Russian massage technique involving big bundles of leaves, is one of the most magical sensations my mortal shell has ever experienced, and you don’t even have to be naked. (And yes, there is a plunge pool, but it’s really quite nice).

Can you blame me, though, when there are pictures like this floating around? 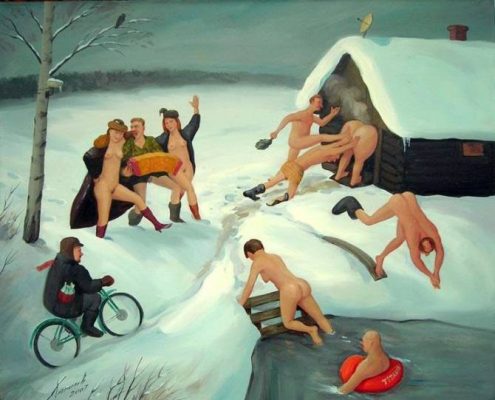 But I went anyway, to Micawber Street off City Road, where underground sits a small but perfectly formed spa. 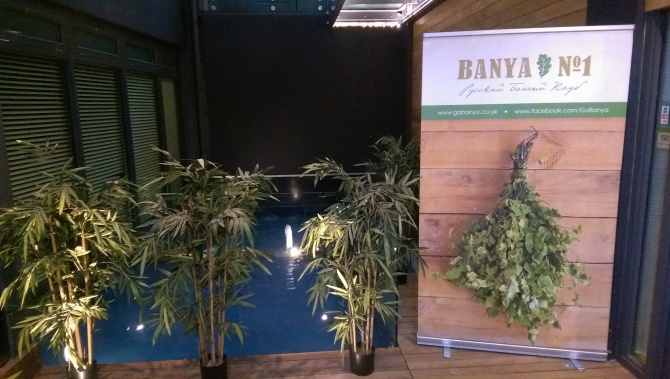 The first order of the day (after disrobing and sucking down a potent cup of herbal tea) was to visit the sauna. Russian saunas are not quite as hot as their Nordic or Western counterparts, but are much more humid, which makes the heat significantly more bearable. This humidity is also better for the skin, which is why the proper way to relax in Russia is to roast, rinse and repeat, over and over. 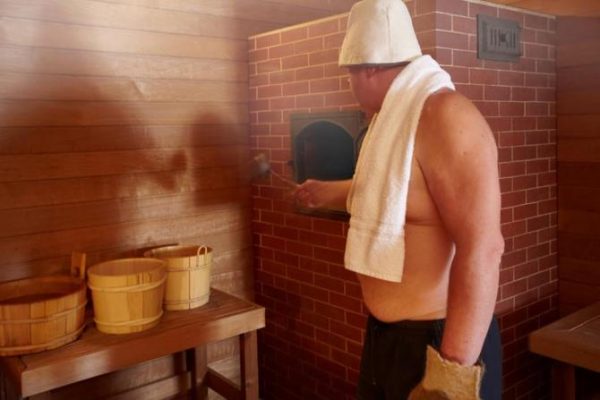 The high humidity in a traditional banya is created by splashing water on to a tonne of cast iron heated to 700°C (!)

After my first sauna session and some epic monging out in the lounge, I was led back in for parenie. Huge bundles of fragrant, wet eucalyptus and birch were laid down for me to rest my face and feet on, and my banshik appeared in a pair of swim shorts, which threw me for a second until I realised how hot you’d get doing something so vigorous in temperatures of 80°C. 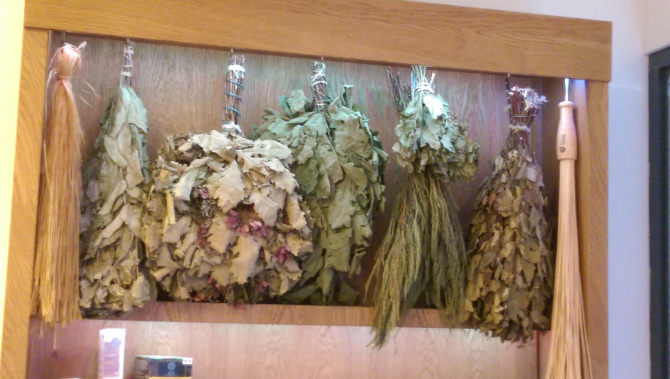 The bundles of foliage – called venik – are actually used primarily to pull the rising heat down on to the body, creating a great whoomph! of warmth before the banshik brings them down onto the skin, creating a sensation not unlike sitting in a torrential downpour. With the scent of the fresh leaves in my nose, the roar of water on the sauna’s hot coals and the wet venik on my back, I could almost believe I was lying in a rainforest.

Once parenie was over, I stood beneath a shower while my banshik pulled a bucket of cool water over me. “Do you feel up to the plunge pool?” he asked, indicating the enormous wooden tub in the middle of the spa. Determined not to miss out on an authentic experience, I nodded. This has been the bit I was most afraid of (excluding the birch whipping, which, of course, was completely unfounded). And yeah, it was cold. Like, reallycold. But it was also amazing; I’d used plunge pools before, but none after anything like parenie.It felt electric. 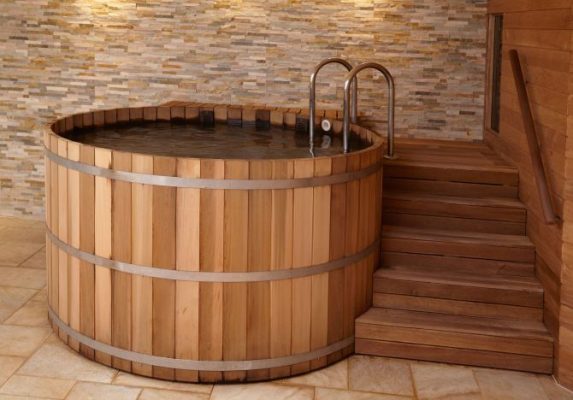 7°C is chilly at the best of times…

BONUS: that eucalyptus is pretty magical stuff – it immediately cleared out my sinuses and gave my skin a lovely glow. 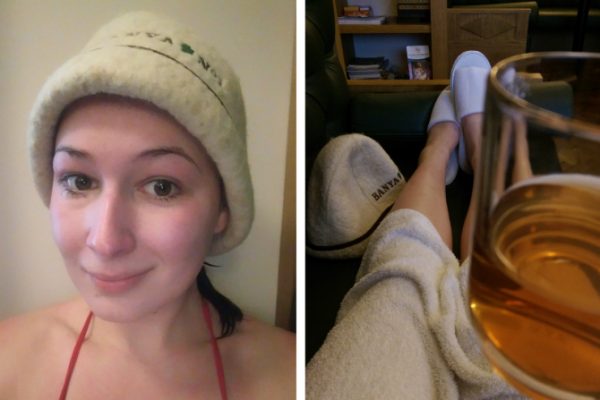 No filter! (I’m not 100% sure what the hat was about, but everyone was wearing them.)

After some more tea, I went to the steam room for my honey and coffee scrub, which frankly made my DIY efforts with a shower loofah look utterly pathetic. The banshik buffed my body – we’re talking almost all of it, buttocks, armpits, decollete – with the industriousness of a Victorian butler polishing the good silver. After the most intense exfoliating action of my life, I was sluiced down with a big bowl of warm water and sent on my merry way. I left as smooth as an otter, smelling faintly of breakfast.

(If you’re self-conscious about getting scrubbed down by a dude, don’t worry. They ask if you’d prefer a lady when you check in, but the staff are totally professional, and I feel like you get much more welly with a male therapist! The banshik who perform parenie are always male though, because it’s so physically demanding). 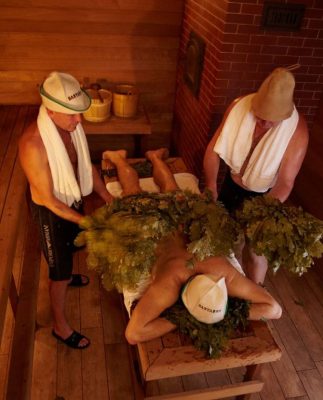 Now, although nothing I experienced at Banya No.1 was in any way painful, these Russians do not fuck about. I’ve had massages from therapists elsewhere who seem to think their clients come in for a tickle, and it does nothing for me. At Banya No.1, however, you can expect some pretty powerful sensation.  Treatments are relatively short. A typical massage in a conventional spa might be 30 minutes at least, but both my parenie session and my scrub were just ten minutes each. It doesn’t sound like a lot of time, but the heat of the sauna and the vigorousness of the scrub make both experiences quite intense.

There’s none of this discreet towel adjusting like you get in English spas either, and no whales crooning in the background. In fact, my parenie session was in the sauna while a group of four women chattered in the background. You’d think this would detract from the experience, but it actually gave the whole thing quite a relaxed, convivial vibe. It probably helped that they were speaking in Russian, though, the effect may have been different if they’d been a gaggle of Essex girls discussing the latest Celebrity Big Brother.

I emerged from the spa to blazing sunshine, feeling like a velvety smooth, tranquil goddess. Which is unusual for me, as I’m usually a flaky-skinned hotbed of stress. (That’s another thing; I suffer from pretty severe eczema, but because Banya No.1 is super strict about all-natural ingredients, not even the scrub aggravated it). Would I do it again? Absolutely. You can even book in to have two blokes do you over with the venik at once, and where else can you get that kind of experience?

I visited Banya No. 1 at the request of their PR team, but, as always, all views are my own.