Kate Weinberg is massaged with twigs at a Russian bathhouse Photo: Paul Grover

Banya involves being hit by branches and having a bucket of icy water chucked over your head. Kate Weinberg visits a bathhouse in London.

It’s 9pm. I am lying face down on a wooden slab in a hot room, musing on how Russian London has become while a tattooed man called Oleg pummels the backs of my thighs with two branches of rustling oak leaves. After all: a Russian man owns Chelsea football club; a Russian has bought the house that backs on to the Duke and Duchess of Cambridge’s in Kensington; a Russian owns London’s daily paper and Russian billionaires are battling out their commercial interests in our courts. The oak leaves rustle higher up and as Oleg whisks the branches over my back, my bikini top pings open.

My husband and I are in a Russian banya, or bathhouse, in east London, and the special Russian technique that Oleg is employing is parenie, a whole-body thrashing or “massage” with a bundle of twigs while lying in a steamy sauna. It is a ritual best known in its homeland for stimulating the blood circulation and releasing toxins and best known here in the UK for the scandal that erupted when it emerged that the then Business Secretary Peter Mandelson had been ritually thwacked while on a trip to Siberia hosted by a Russian oligarch.

An introduction to the Russian banya

The banya is no stranger to politics. “Many of the most important decisions in Moscow are made in the banya,” Oleg tells us, bringing to mind a vision of Putin with a towel slung around his hips, baring his pecs for a testosterone-fuelled summit with his cronies. Talking politics in the banya seems to be the Russian equivalent of an Englishman cutting a deal on the golf course.

Although we are there on a mixed boys and girls night, it certainly feels like a very male environment. The no-frills changing areas are more gym locker room than hotel spa. And having changed into our bathing kit, we are escorted through to what looks like a small clubroom bar with racing green leatherette booths. A television hanging in the corner is showcasing some Russian crooners from the Seventies. At least we assume they’re from the Seventies, though perhaps that’s just what Russian pop stars look like.

This is the bar in which we are supposed to rest, eat and knock back vodka shots between sauna sessions. To be clear, the banya is not quite the same as a conventional Nordic sauna, although sitting between its sweltering, aspen-clad walls certainly feels like one. In fact, it is less hot. Its temperature is kept below 80C and the air is “wetter” because of water splashed on a tonne of cast iron which is baking at around 700 degrees inside a brick furnace. The steamier air is said to be more beneficial for sweating and detoxifying. 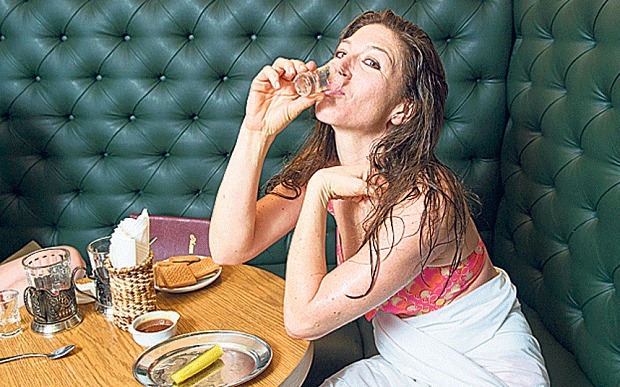 Kate knocks back a glass of vodka (Paul Grover)

As we walk into the banya we are each handed a small felt hat like an off-white tea cosy. Not only does it strip any remaining glamour from an already sweaty situation, the hat, we are told, keeps our heads from getting too hot. There are only a couple of other people in the hot room, one of whom is a Ukrainian. We sit sweating together until a toothless old Russian guy who clearly doesn’t speak any English (or otherwise is doing a very good impression of a toothless old Russian guy who doesn’t speak any English) walks in and gestures at a slab of wood in the corner. I volunteer not to go first.

It is like something from a James Bond film. Just as my husband gets comfortable, the old guy exits and a huge young man with a glistening bare chest and a jaw that looks like its been squared off on a butcher’s block walks in twirling two bunches of leaves like an outsize cheerleader.

It’s funny to watch; less funny when it’s my turn. At first it feels like heavy rainfall on your calves, up the backs of your thighs, onto your back and shoulders. But as the parenie progresses the tickling turns into slapping, which turns into a Christian Grey-style thwacking. The idea is apparently not to massage the body but to increase blood circulation and bring the blood – and toxins – up to the surface of your skin. The bundle of twigs – venik – can be oak, birch or for a more aromatic experience, eucalyptus. A few minutes into the parenie the door opens and the buff man is substituted by Oleg, who is twirling a new set of branches.

It is a 10-minute ordeal, with three different veniki. It feels strange, but only becomes unpleasant in the last minute, not because it is painful – which strangely, it isn’t – but because the twigs’ increasing tempo is moving the air at such a pace it suddenly feels claustrophobically hot. 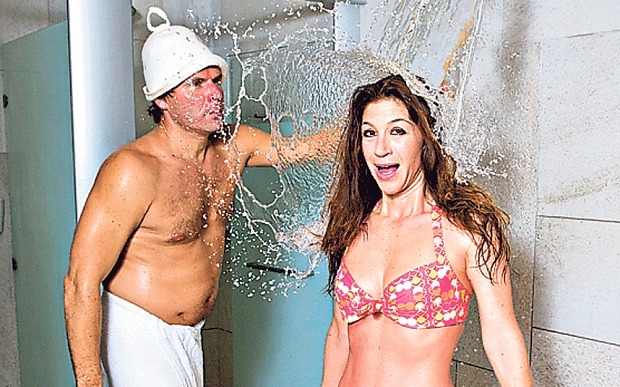 Exactly at this moment, I am helped to my feet, led out of the sauna and placed under a bucket shower which is pulled with a rope. Icy water cascades over me and I’m hard pressed not to shriek. But the punishment is not over. Oleg leads me up the stairs of a deep, wooden plunge pool and I am encouraged, well, sort-of-forced, to jump in and submerge myself. The water is 8C and I am in and out like a jack-in-the-box. My husband manages to stay in for a few seconds, but when he emerges, red-faced with his mouth gulping for breath like a goldfish, I worry for a moment he’s going to have a stroke. In fact, the heat followed by extreme cold is supposed to have the opposite effect. The old Russian man thumps his chest and says something to Oleg who translates.

“Very good for the heart,” he says. “If you do this regularly, no heart attack. No stroke.”

We retire to the bar and order gherkins, a couple of shots of vodka and a glass of beetroot kvass. When the kvass arrives, we look at the deep purple drink. We taste it.

“What is this?” I ask the Russian waitress. She picks up the glass. She looks at it. And she gives a Baltic shrug: “It is this,” she says. And she’s right. It is.

Parts of the Russian ritual remain mysterious to us, but not its appeal. Two and a half hours after we walk in, we leave the banya feeling renewed. My skin is so softened that my iPhone doesn’t recognise my thumbprint for its touch ID. Tingly and energised, only partly thanks to the vodka, we emerge into the night and make our way back through the lights of Moscow-on-Thames.